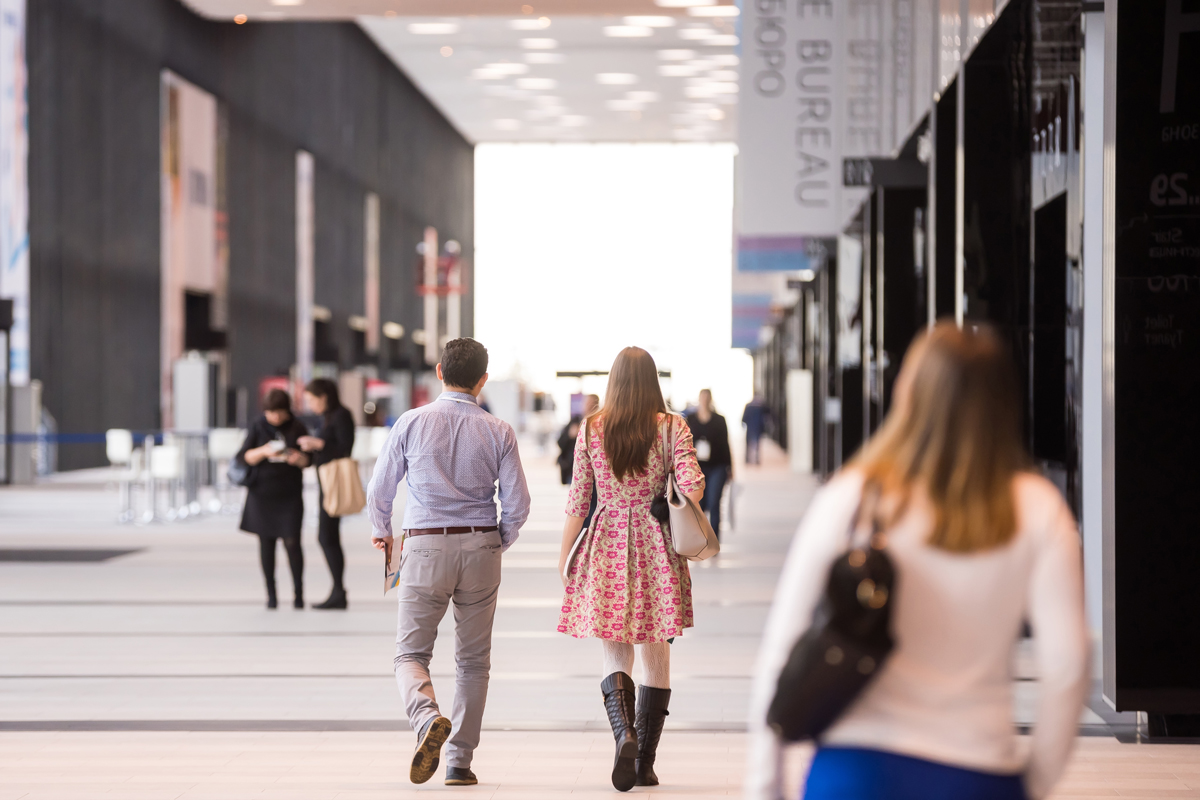 The release of the International Congress and Convention Association’s 2018 Country and City Rankings marks yet another successful year for the association meetings market, with the global meetings industry trade association capturing a total of 12,937 rotating association meetings taking place in 2018, at an increase of 379 additional meetings compared to the number recorded at the same time in 2017. The highest annual figure ICCA has ever recorded in its yearly statistics, these new rankings signal industry growth is continuing on a strong and robust trajectory.

Paris, which previously held the top city spot in 2016, returns in 2018 to claim first place. The USA continues to top the country rankings. 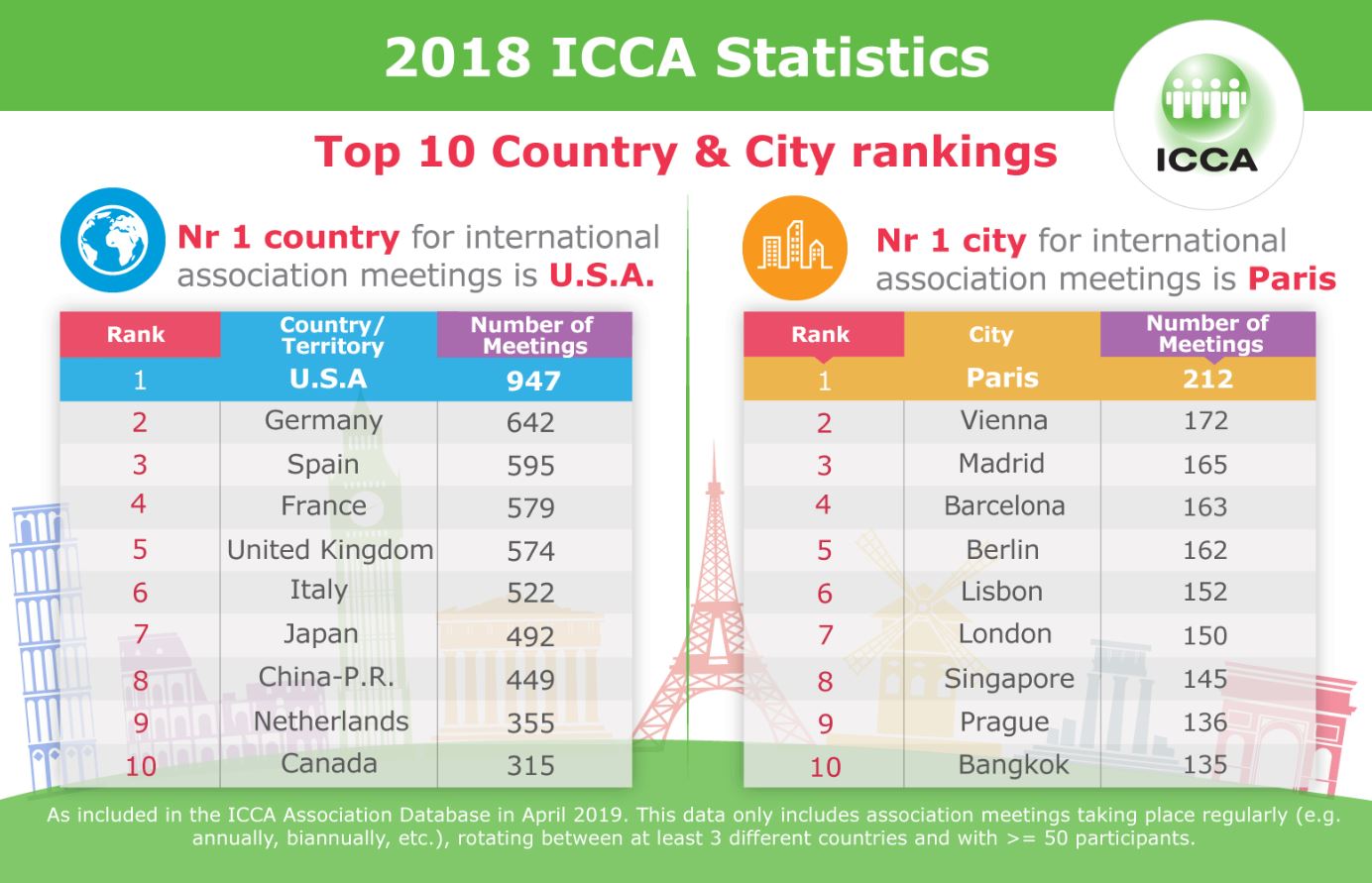 According to ICCA statistics, between 1963 and 2013, the number of international association meetings doubled every 10 years. Released in October 2018 to coincide with its 55th year anniversary as an association, ICCA’s latest industry report on the 55-year growth of the international association meetings market, “A Modern History of International Association Meetings – Update: 1963-2017”, confirmed that this exponential growth trend has now slowly transcended into a more mature, yet still solid, growth pattern between 2013 and 2017. The 2018 figures seem to confirm this trend.

Paris climbs to the top of the city rankings by number of international association meetings with a landslide margin of 40 meetings above second place holder Vienna. In 2017, Paris and Vienna held joint second place, with 190 meetings each. Last year’s number one Barcelona falls to fourth place, with Madrid entering the top 5 for the first time since 2015 in third place. Among the top 5 cities for another year, Berlin falls to fifth place from fourth in 2017.

Remaining in the top 10 but changing position are London, Prague, Singapore and Lisbon. London, Singapore and Prague drop to seventh, eighth and ninth place respectively, and Lisbon climbs three positions to hold sixth place. Bangkok rises seven places from 17th to 10th, knocking Seoul out of the top 10. Seoul falls to 15th place, surpassed by top 20 risers and joint position holders Amsterdam and Tokyo, which jump from 16th to 13th place and 18th to 13th place respectively. Buenos Aires stays firmly in 11th place and Hong Kong rises to 12th. Dublin drops four places to 18th, and Stockholm holds 19th place for another year. Montréal, QC and Rome drop out of the top 20, and newcomers Brussels and Taipei enter in 17th and 20th place. 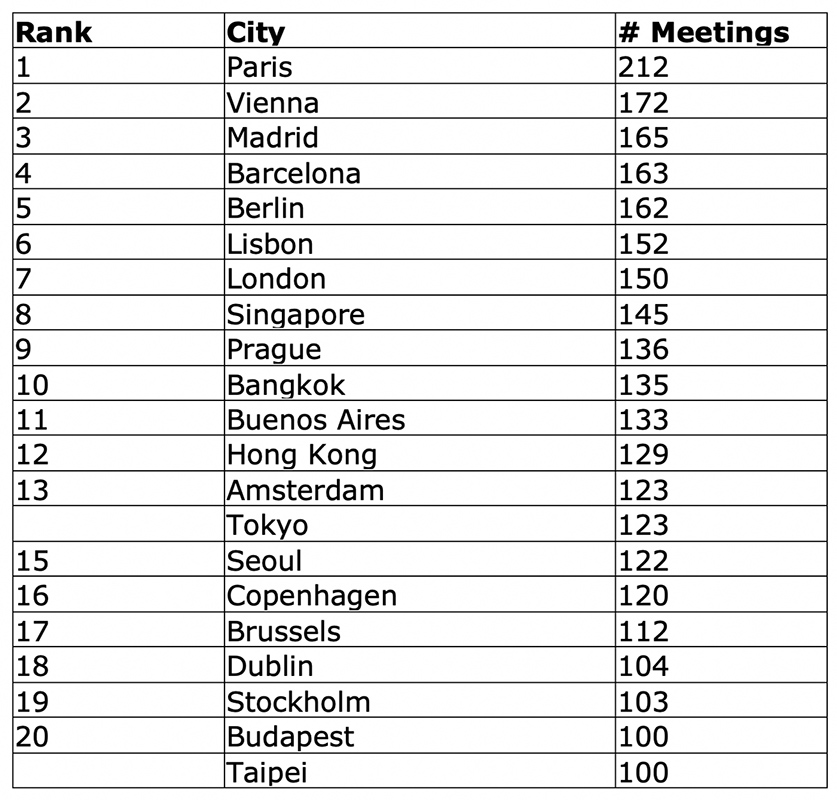 In an unsurprising turn of events, the USA remains in the top country spot, unchallenged for over two decades. Germany remains in second place and 2017’s number three the United Kingdom drops to fifth place, overtaken by Spain, which rises to third. After exiting the top 5 last year, France re-enters in 2018 in fourth place. Italy replaces France in sixth place, and Japan and China-P.R. remain in seventh and eighth place for another year. The Netherlands and Canada swap positions, coming in at ninth and 10th respectively.

Portugal remains in 11th place and Republic of Korea climbs one position to 12th. Brazil and Poland fall one place to 17th and 19th respectively, and Switzerland drops to 20th place, while Australia and Sweden climb to 13th and 14th. Austria remains in the top 20 but falls four places to 16th. Newcomer Argentina regains its position in the top 20 after falling to 21st place in 2017, knocking Denmark from 20th to 22nd place. 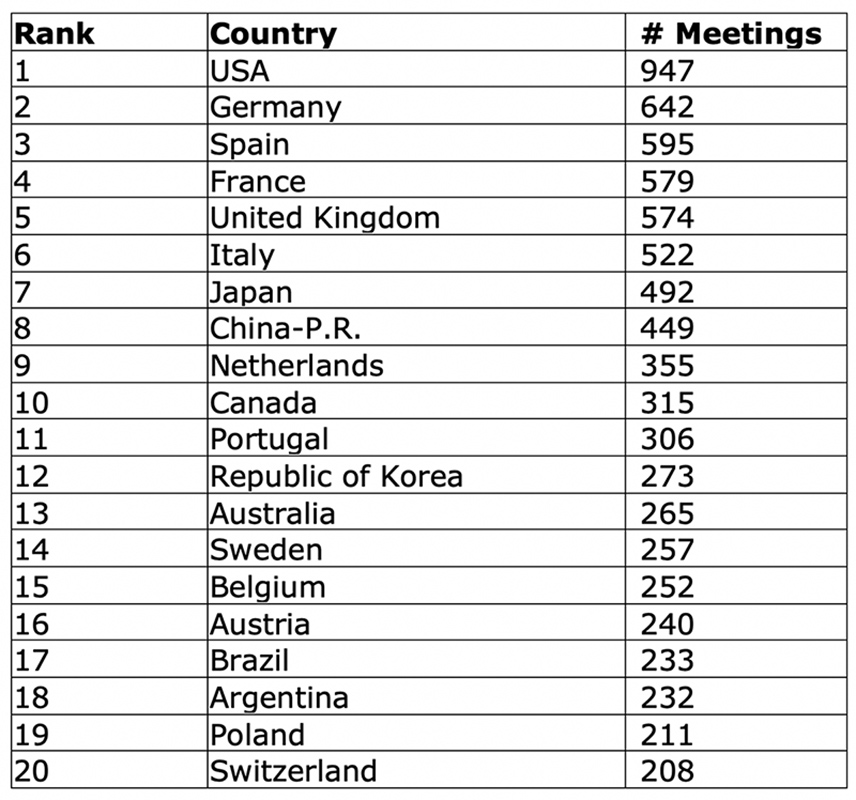 The most respected global comparison of destinations’ performance in attracting international meetings, ICCA’s annual country and city rankings are highly anticipated by the meetings industry. However, ICCA continuously seeks to emphasise that this annual report is a snapshot of just one segment of the meetings industry, focused on charting the growth of international association meetings. Only those meetings that meet ICCA’s stringent assessment criteria – rotating between at least three countries, have a proven attendance of at least 50 participants, and are held on a regular basis – are recorded within the global association’s annual statistics.

ICCA CEO Senthil Gopinath said: “Although the most comprehensive global benchmark of the international association meetings sector, the ICCA rankings should not be mistaken as providing an overview of the entire meetings industry. We always seek to encourage and advise ICCA members to consult other rankings and collect their own meetings statistics to help them provide a full picture of their performance.”

“We have recorded our largest ever annual snapshot of the immediate past year’s meetings data in 2018,” Gopinath continued. “These results closely follow the release of our 55-year history of the international association meetings market in October 2018.

ICCA’s latest figures uphold the mature, robust growth pattern we identified in this report and provide more evidence of our firm belief that the association sector continues to be an unrivalled stimulator of global societal development and force for progress across the globe.”

If your trip is located on the M-10 Federal highway between Moscow and St. Petersburg, or you are intentionally planning a trip to the city of Tver, which is a fairly large cultural centre and the industrial centre, the 4-star Hotel Osnabruck can be one of your variants of a hotel.

Hotel budget season is here, and the gloves are off. IDeaS CFO on the future of revenue

For hotels, budget season is the main event of the year, a time when owners and operators battle it out in the ring over next year’s spending. It’s often a gruelling match, with round after round of negotiations that leave both sides exhausted and no clear winner.

Kämp Collection Hotels published an announcement regarding the company’s acquisition by the Nordic Choice Hospitality Group with its headquarters in Norway.