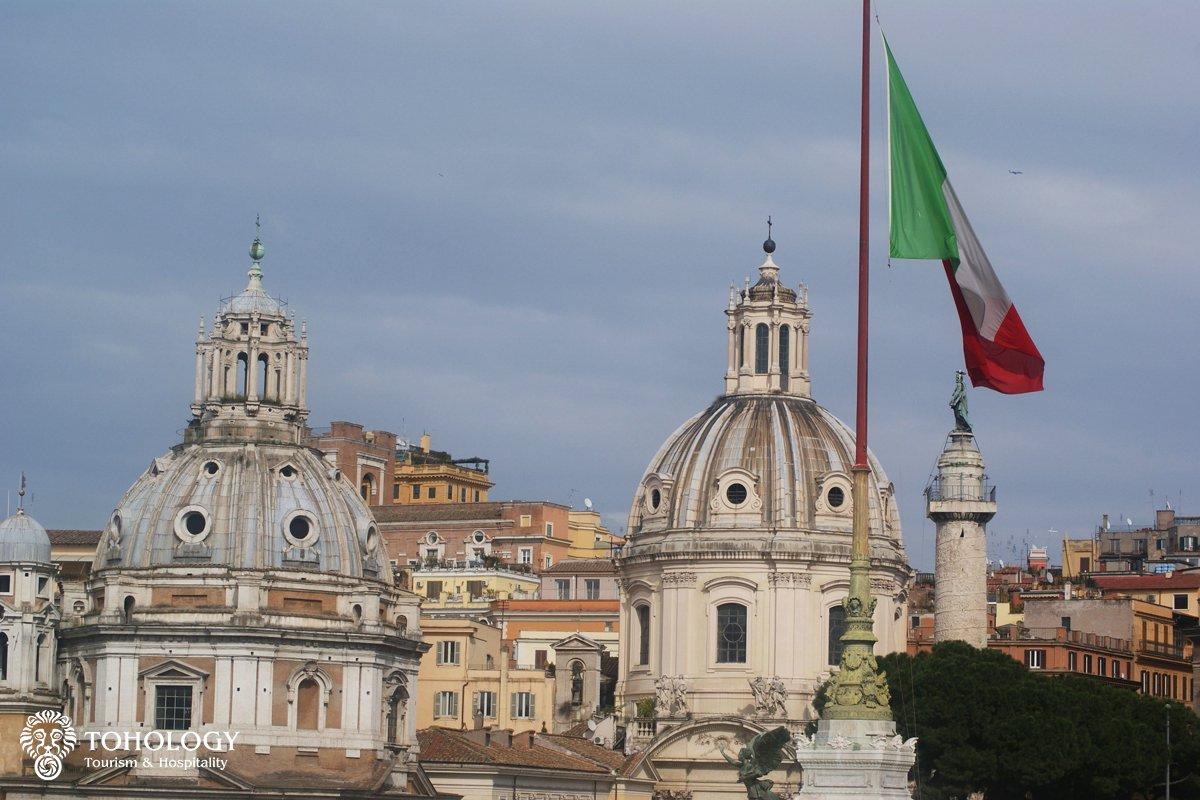 All cities were built differently: there are ones like Venice and Saint Petersburg that “emerged” from water and ones like Rome, which was built on hills. Probably that is why there are so many stairs in the Eternal City, leading to the hill summits, which uncover truly amazing views.

The easiest to approach and, for sure, one of the first observation decks which appear on tourists’ route is the terrace on Piazza di Spagna, at the foot of Trinita dei Monti. You can see several streets and domes of many cathedrals from there. Entrance is free. The street, leading from terrace, is parallel to the main street of Rome – Via del Corso. 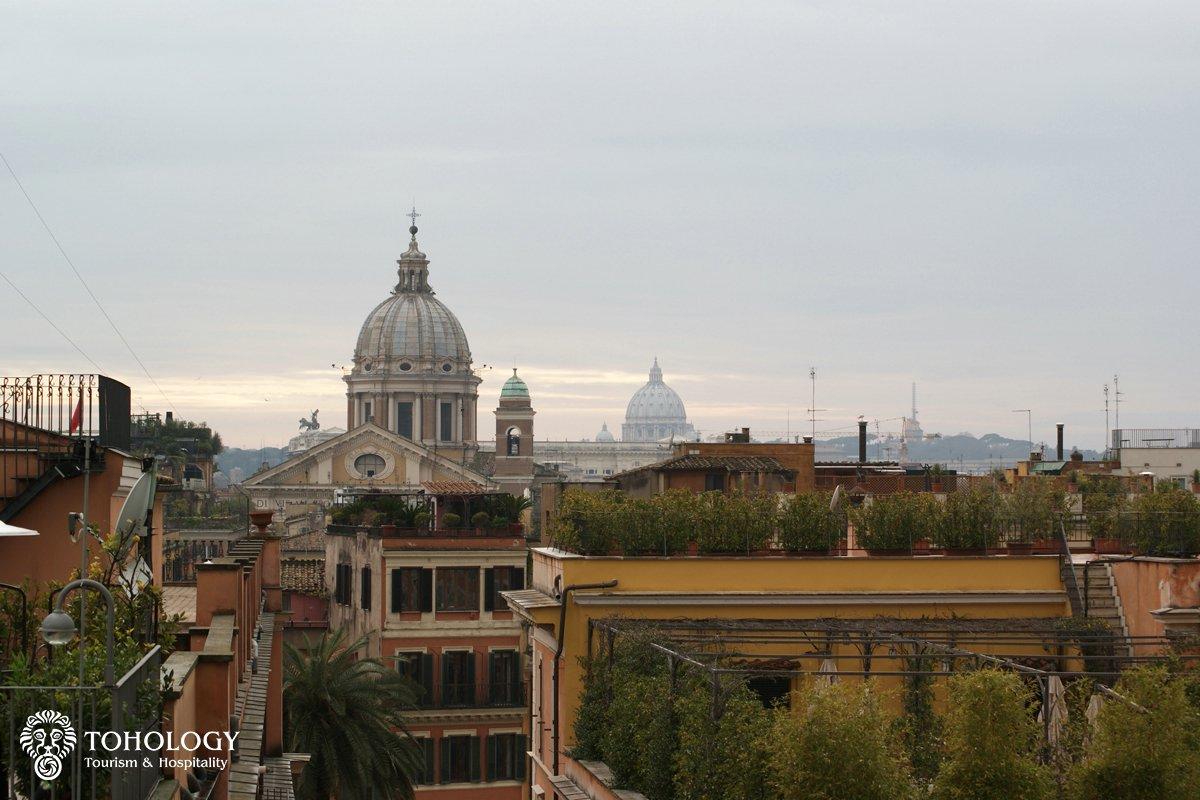 Down Via del Corso there is another observation deck named terrazza del Pincio. It goes to Villa Borghese park, which is the favourite place of Romans to spend their weekends. You can reach the terrace walking up a winding footpath that lies on the eastern part of piazza del Popolo. This terrace has amazing views of piazza del Popolo, Altare della Patria and Vatican district. I should add that fairly poor backlight of Rome seems quite impressive from there. 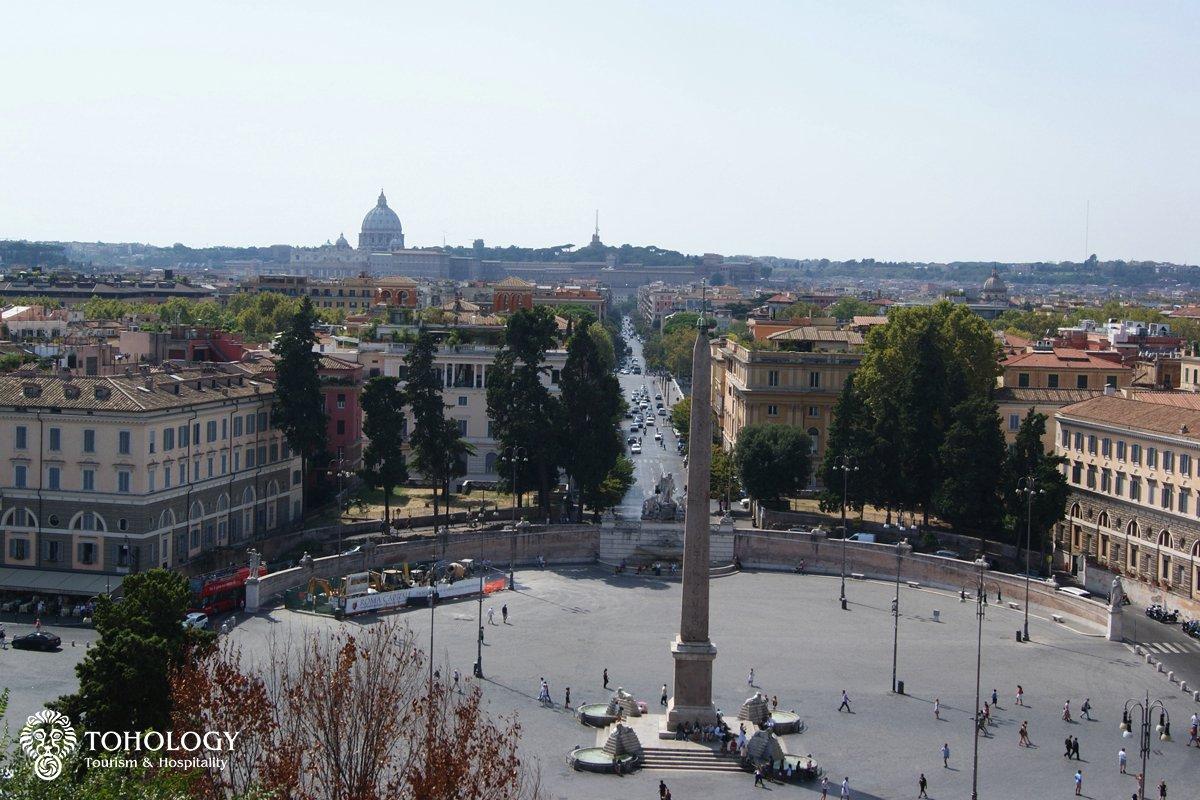 The observation deck of Altare della Patria (il Vittoriano) is my favourite. The first time I went up there, I swooned with admiration: Rome was spread before the eyes, and it was absolutely glorious from the height of 80 metres. Actually there are two observation decks (with free and paid admission) and a view cafe on roof top of the palace. I recommend the one with paid admission, mostly because it is higher and it has views of the Acient Roman Forum, the Colosseum and The Capitoline Hill from one side and Medieval Roman Squares, Villa Borghese and many more sights from the other. Tickets cost 8-10 euro (as per 2012).

View of the southeastern part of Rome: 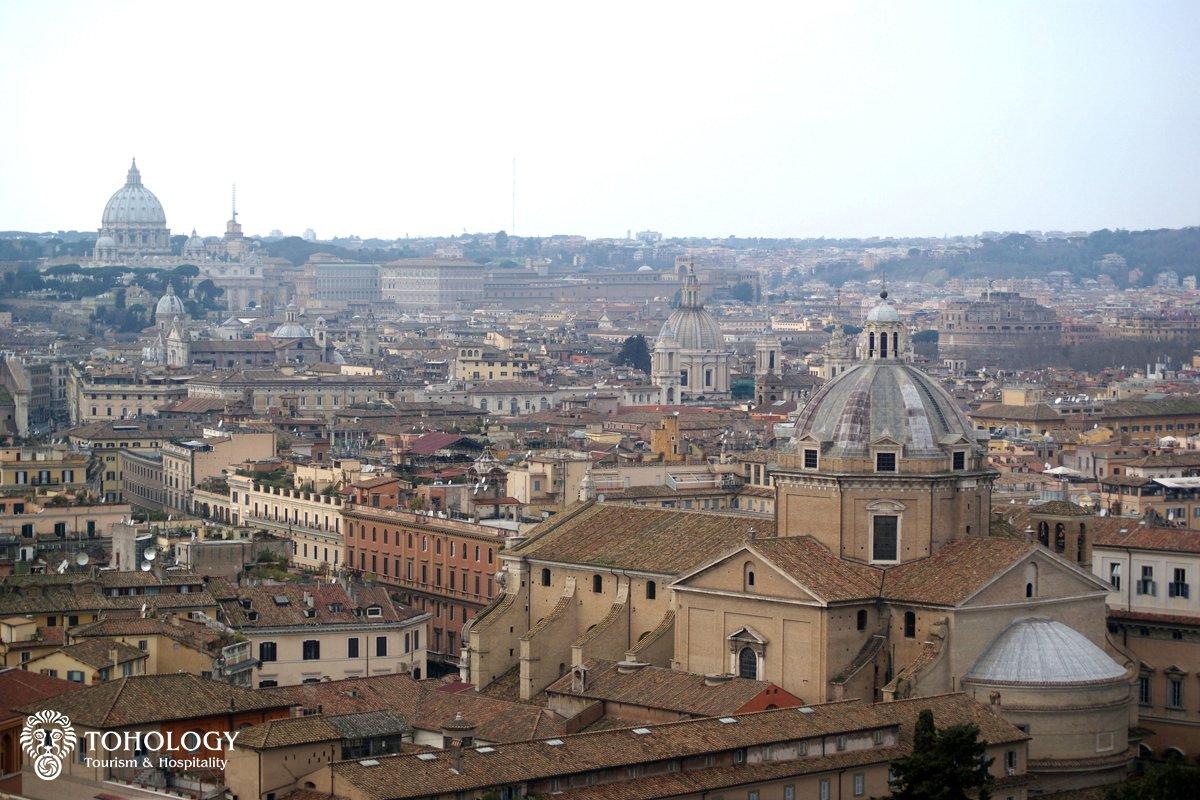 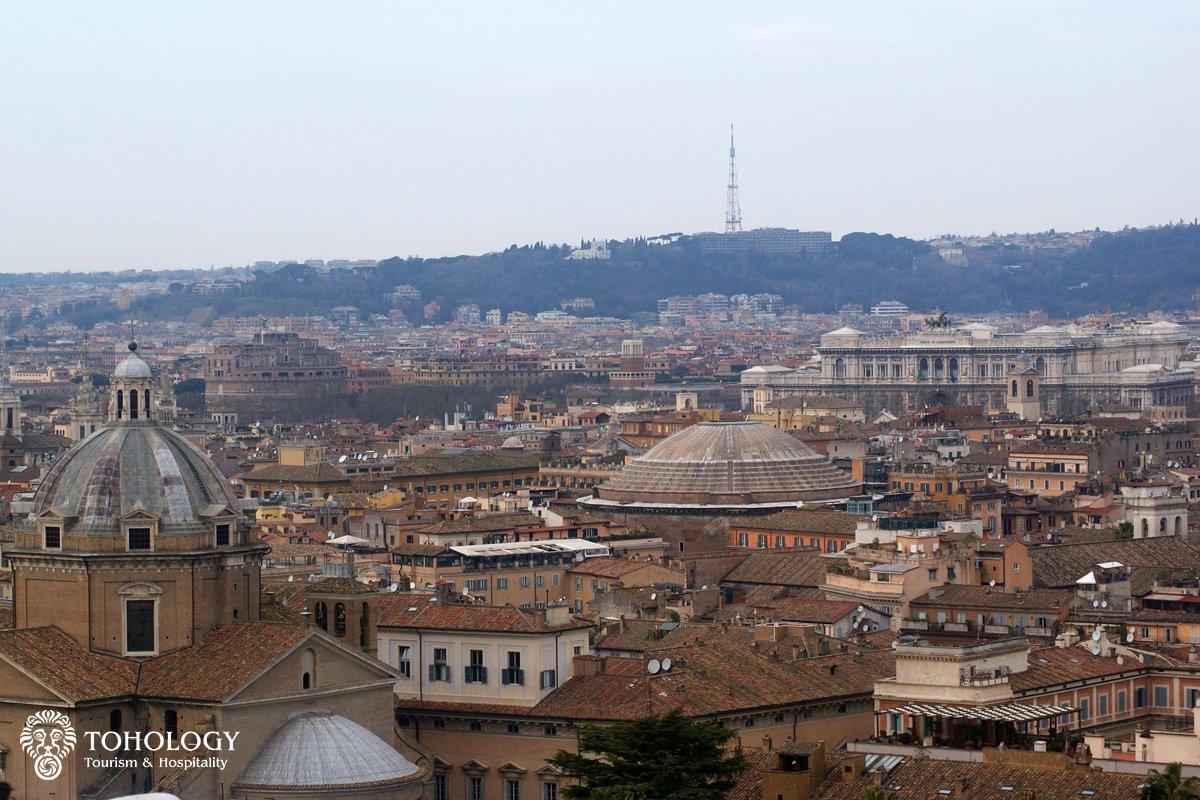 Castle of the Holy Angel, Palace of Justice, The Pantheon 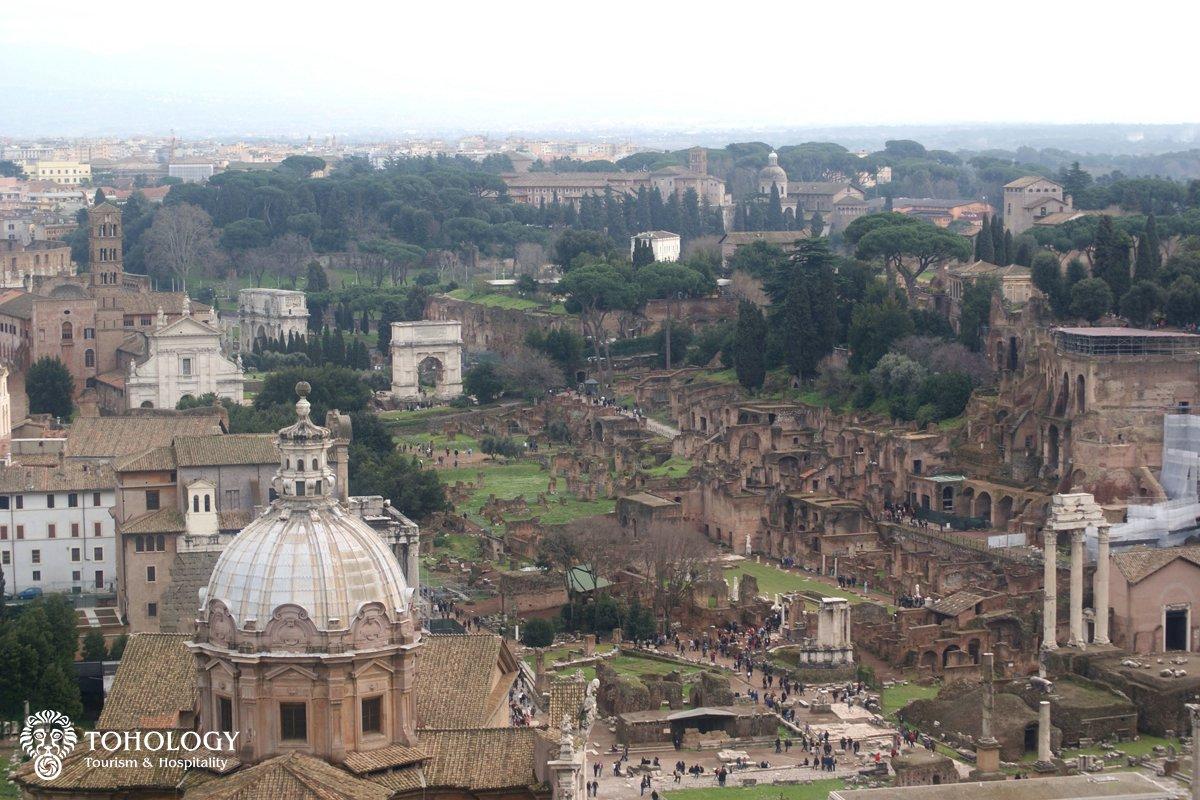 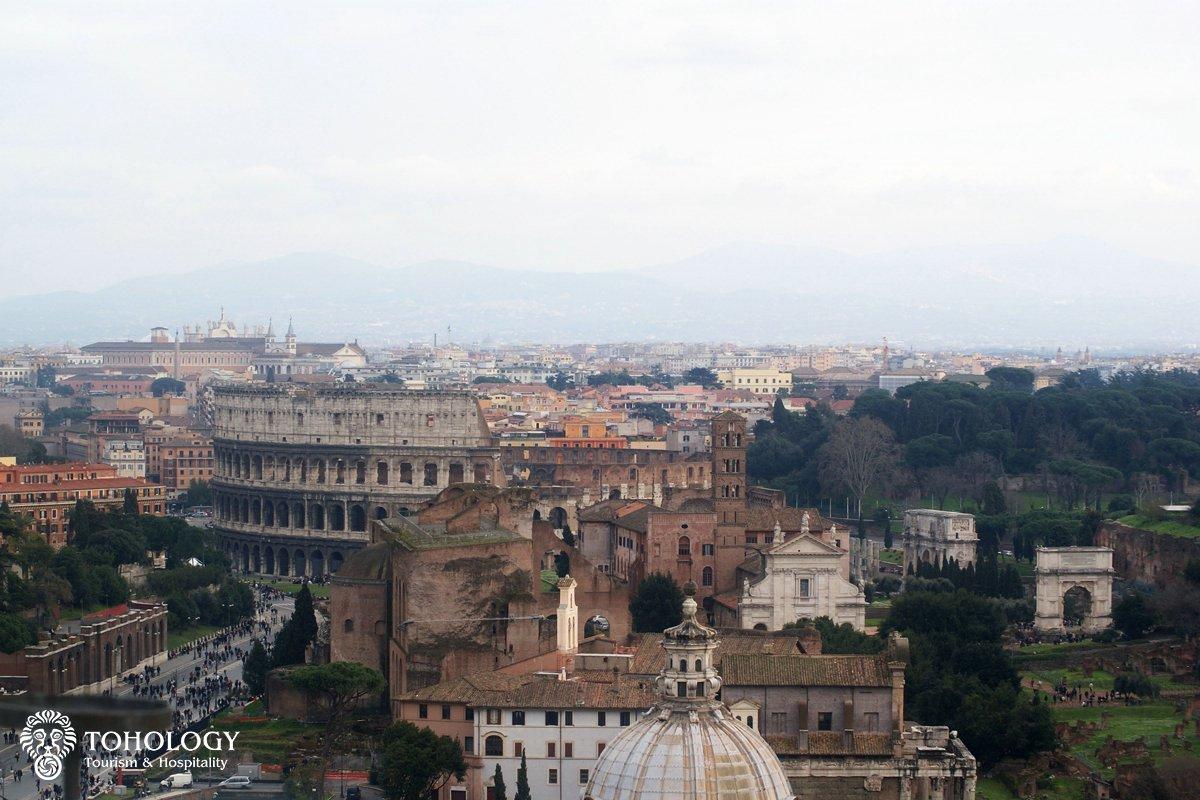 The Colosseum and The Imperial Fora

The most famous observation deck in Rome is the Papal Basilica of Saint Peter’s dome. From one side it has a view at the Vatican City with its palaces, gardens, museums, castle wall and part of Rome, from the other side – view of Saint Peter’s Square, which occupies the largest part of world’s smallest country and the Tiber's embankments. Keep in mind that in wintertime (October – April) the observation deck is open until 4 p.m. So it is better to visit it in the morning not to waste all your day standing in queues. You can buy a ticket for 4 euro and go up the whole way by foot or buy a ticket for 8 euro and use a lift to the loggia of Apostles, then go by foot 320 stairs more. Let me warn you about the staircase: it is spiral, very narrow and you will have to walk, all along buckling to the right. You may get tired but views of incredible Rome will make you forget about everything. Don’t forget about the dress-code valid in the Vatican City. 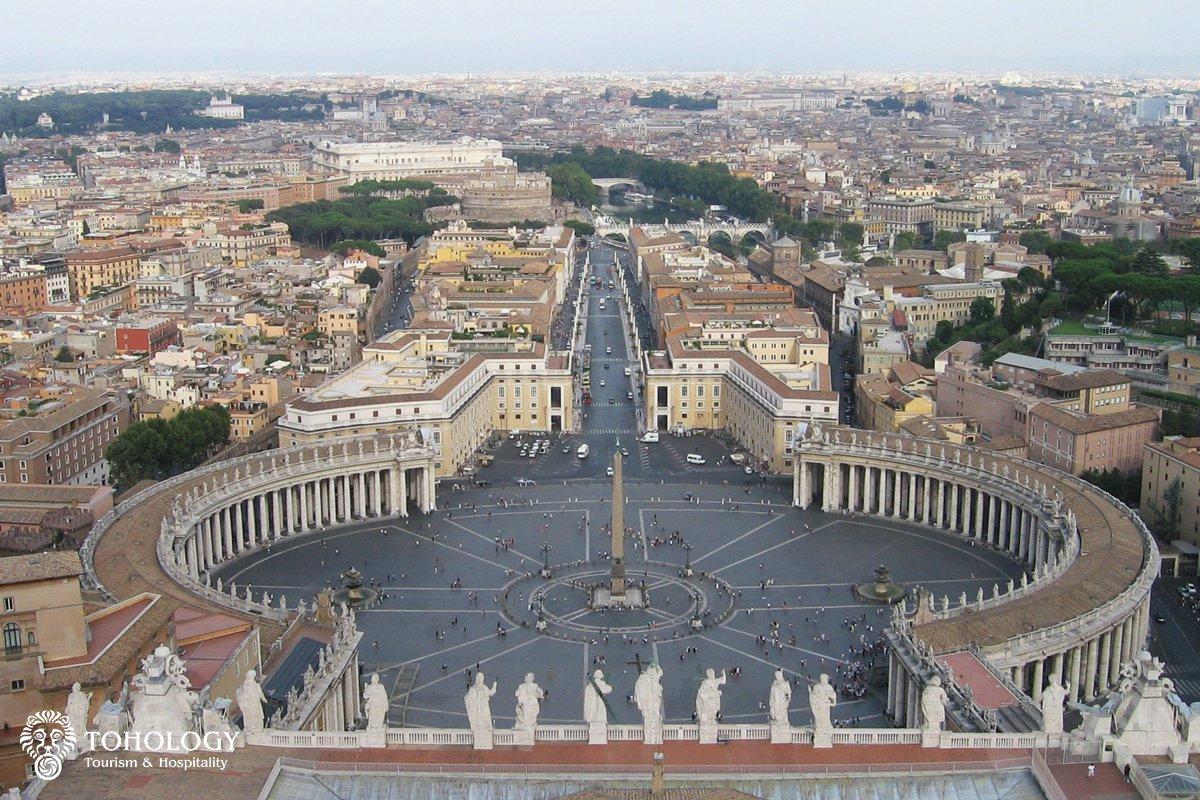 For those who are not ready to enjoy Rome’s views from The Papal Basilica of Saint Peter’s dome, I can suggest another observation deck which is near Vatican – in Castle of the Holy Angel. It's exactly the one, which had been visited by Julia Roberts in the movie "Eat, Pray, Love". Although these observation decks are quite close to each other, you will get absolutely another view at the Tiber's embankment, south-western Rome, the Vatican City, and a secret passage that links the Vatican City with the Castle called Passeto. The admission fee is 8 euro.

Strolling down the Eternal City don’t forget about the famous Roman hills which also give great opportunities to admire the city for free. L’Aventino, il Palatino and others will show you Rome from different sides. For those who have already been to Rome, I recommend visiting il Gianicolo. It is not very easy to get there, so I advise you to combine the walk to il Gianicolo and Trastevere (Rome's district). This hill is as high as Altare della Patria: approximately 80 meters; and it has a breathtaking panoramic view of the whole Rome. It is enjoyable to look at familiar sights from unusual perspectives. There is a monument to a national hero Giuseppe Garibaldi on the top of the hill, which is visible from many places of the Tiber's embankment or Trastevere, that is why you'd easily find this hill.

There are places represented in both guides – Michelin and Relais & Châteaux. One of such hotels is located in Ostuni, Italy. The beautiful 16th-century mansion of the La Sommità hotel seems to be drifting away into the white glow of the town buildings.