With the crown football match of four years over, and the French team's victory over the Croatians becoming a thing of the past, the time has come to assess the short-term impact of the 2018 FIFA World Cup on the tourism and hospitality industry of the host country. The article offers a market overview of the hotels launched in Russia in the first half of 2018, evaluates the hospitality sector statistics and looks at some of the factors affecting the tourism industry.

Hoteliers preparing for the World Cup in H1 2018

The members of the Russian hotel market spent the first half of 2018 girding for the World Cup – the major sporting event that took place from June 14 to July 15. According to market experts, 2,800 new branded rooms were prepared, and many existing hotels in the country had their rooms renovated.

For hoteliers, the first six months of the year passed mainly under the sign of the World Cup. Of the 11 host Russian cities, Moscow hotel market was the one to achieve the maximum results. As could be expected, the Russian capital acted as a hub welcoming most of the fans (over 3 million) and hosting the greatest number of World Cup matches (12 of 64) in two stadiums. Meanwhile, CBRE analysts noticed a drop in the demand for branded St. Petersburg hotels in June, which is the popular period because of the White Nights. Compared to the same period of last year, tourist groups chose to refrain from visiting the city during the World Cup. From the point of view of marketing, Russia has received unequivocal benefits by having been promoted as an attractive tourist destination.

As reported by JLL, of the 2,800 branded rooms commissioned during the period from January to June 2018, about 90% were set in the cities hosting the World Cup. Over the same period in 2017, 1,900 hotel rooms were introduced to the Russian market, while over the first half of 2016, the hotel room capacity increased by only 1,700 rooms. Moscow and St. Petersburg are the most popular locations for launching branded hotels.

According to Colliers International reports, in the first half of the year, the total number of rooms in international branded hotels in Moscow grew by 5.6% with the opening of four new hotels, that is by 953 rooms in total. Thus, by the end of June, there were 69 hotels in Moscow run by international operators with the total of 17,843 rooms. Cushman & Wakefield estimate the total hotel room capacity in classified accommodation facilities in Moscow to be approximately 60,000 rooms (hostels and apartments not included).

The St. Petersburg hotel market saw the opening of two international branded hotels new to the city – Holiday Inn Express (IHG) and Meininger Hotels. 897 rooms (20% more than for the whole of 2017), were added to the total number of quality hotel rooms in St. Petersburg over the first half of the year. According to Colliers International, the total number of rooms in quality hotels in the Northern Capital is approximately 22,000 (hostels, mini hotels and departmental hotels not included).

JLL consultants noted an increase in the quality hotel occupancy in Moscow during the first half of 2018: of more than 30,000 rooms available, 72% were occupied, which is 2.7 percentage points more than last year. The average daily rate (ADR) in the capital of Russia has reached 11,200 RUB (Russian roubles), showing a 48% increase.

Both markets have increased the average profitability of hotels per occupied room over six months: the revenue per available room (RevPAR) in Moscow increased by 52% (up to 7,700 RUB), and in St. Petersburg – by a much more modest 10% (up to 4,700 RUB).

Hotels' operational results for the first half of 2018 for Moscow Source: JLL 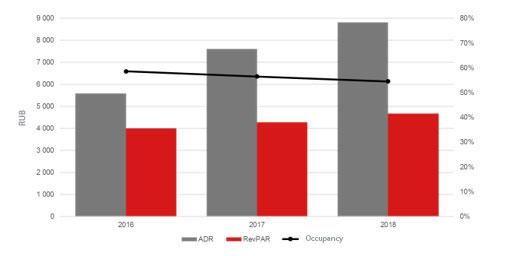 Hotels’ operational results for the first half of 2018 for St. Petersburg Source: JLL

The most popular hotels in Moscow from January to June of this year were hotels of the Upscale (78%), Economy (77%) and the Upper Midscale (76%) segments. The Luxury segment hotels turned to be leaders in the tariff rise, increasing their rate by 73%, up to more than 30,000 RUB.

The most popular hotels in St. Petersburg turned to be those of the Upscale segment too: over the first half of the year, these properties sold 69% of their rooms, which is 1 ppt more than in 2017. The most expensive luxury hotels in St. Petersburg fell 3,000 RUB behind their Moscow counterparts: it cost 27,000 RUB to rent a room there in the period from January to June, which provided a smaller increase compared to Moscow – only 15%.

Constructing hotels near airports is considered to be a common practice for hotel operators. The increased passenger traffic in airports, the lack of sufficient hotel accommodation in some of them, as well as the popularity that airport hotels gain among the organizers of conferences and events allowed to continue implementing this efficient construction experience in the run-up to the 2018 World Cup in Russia.

Compared to the first half of 2017, the total passenger traffic in Moscow airports (Vnukovo, Domodedovo and Sheremetyevo) increased by 7.3% in the first half of 2018. The market is ready for the opening of one more hotel near the air gate to the capital: the launch of the Four Points by Sheraton Moscow Vnukovo Airport hotel is scheduled for the first quarter of 2019.

According to JLL research, with reference to the corresponding decree of the Government of the Russian Federation, 13 airports were built or reconstructed for the World Cup, with the total cost amounting to 118 billion RUB. 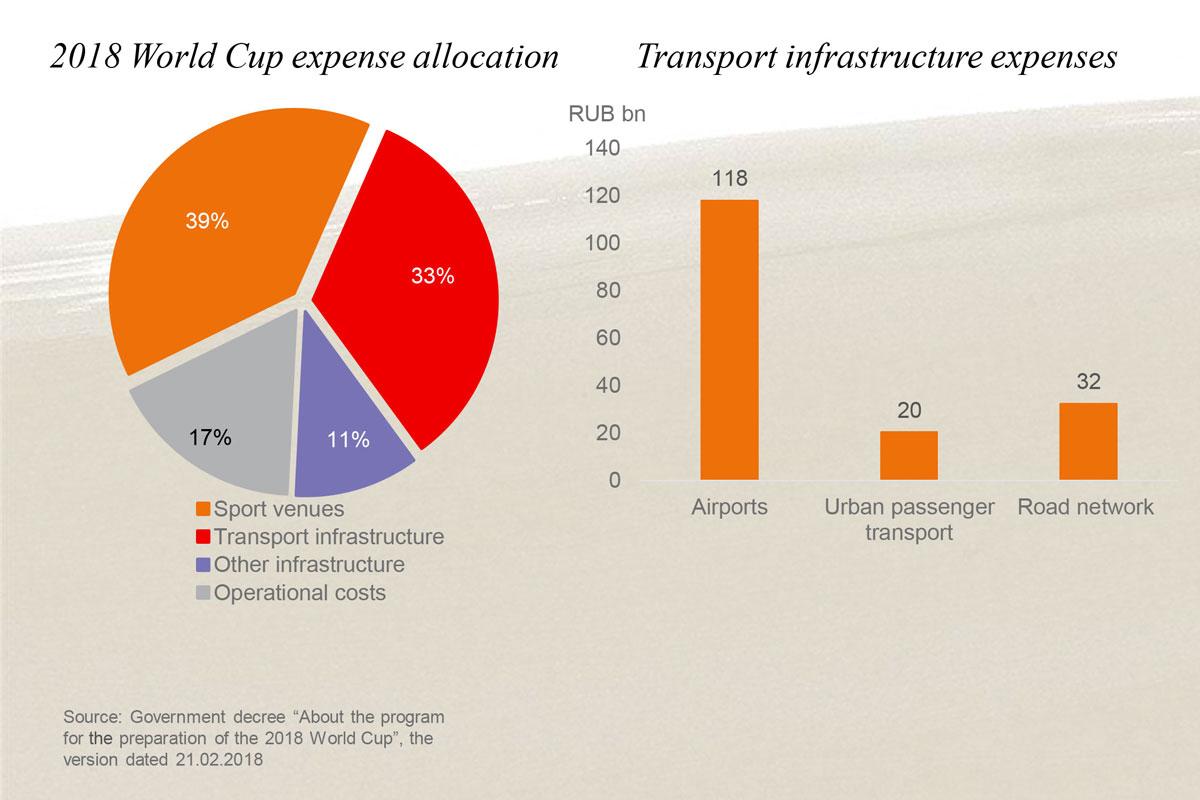 According to the local organizing committee, the total impact of the 2018 World Cup on the Russian economy may actually consist of about 150–210 billion RUB yearly in the next five years, with tourism contributing 40 to 70 billion RUB. 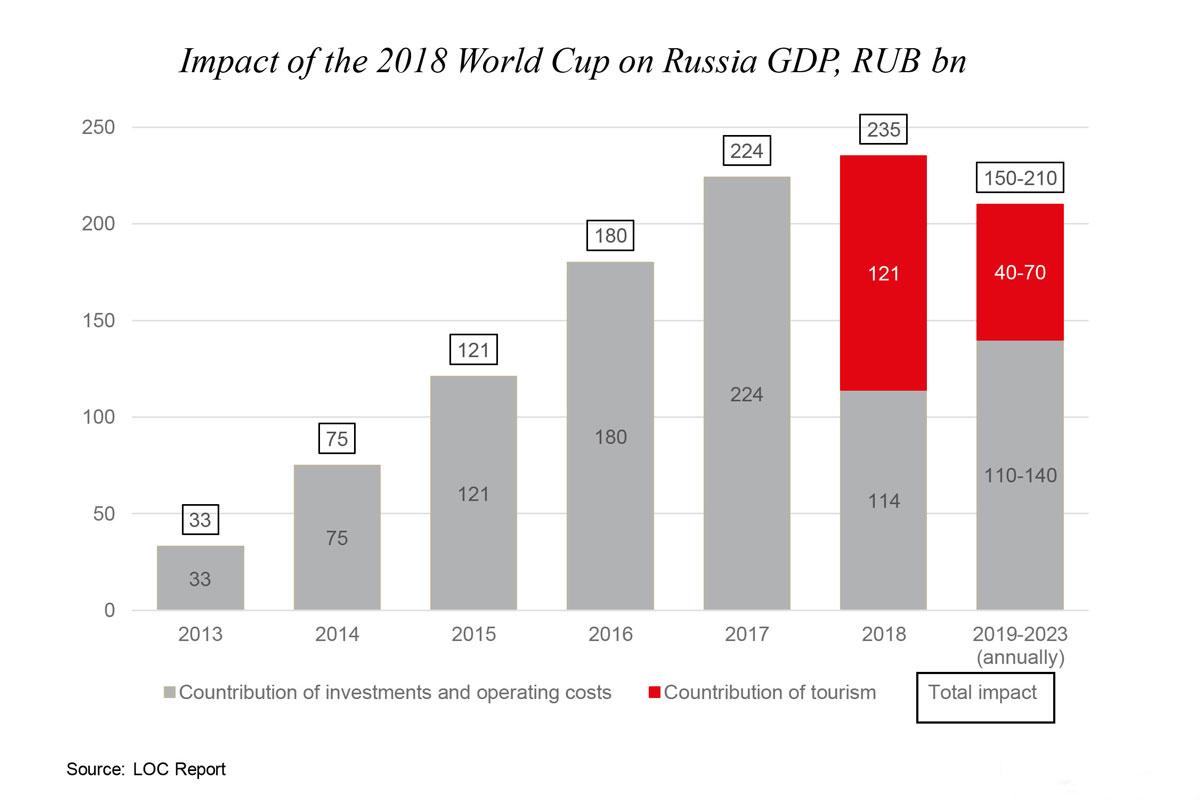 The World Cup will contribute to the development of tourism in Russia, although not in all regions. In addition to the infrastructure updates, including transportation and hotels, tourists may also be attracted by the multiple visa-free entry to the Russian Federation granted by legislative amendments and valid for FAN ID holders till December 31, 2018.

Cushman & Wakefield experts, however, predict that even those Moscow hotels, which benefited from the World Cup in style, will be forced to trim their occupancy and revenue forecasts and bring them closer to the more familiar rhythms.

Quality hotel rooms (Quality hotels): 3-star hotels and above. Hotel rating by stars is based on the classification of hotels in the Russian Federation (the analysed market).

Branded hotels: hotels working under a single hotel brand under international operators. The concept does not include independent hotels.

The hotels are graded based on the STR classification.

Class – a categorization of chain-affiliated and independent hotels. The class segments are:

On 12 November SWISSAM hosted the Career Day for representatives of the hospitality industry for the second time in a row. TOHOLOGY took interviews with a few directors participating in the Career Day and also prepared a special photo report about this event.

26th Moscow International Travel & Tourism Exhibition was organized on 12-14 March, 2019 at Expocentre. TOHOLOGY visited Mitt-2019 and prepared a photo coverage of the exhibition and events of business programme.

On January 17, 2013 thousands of chefs and lovers of Italian food from all over the world celebrated the International Day of Italian Cuisine (IDIC) for the sixth year in a row. The IDIC 2013 official dish was tiramisu, very popular Dolce Italiano in the world.